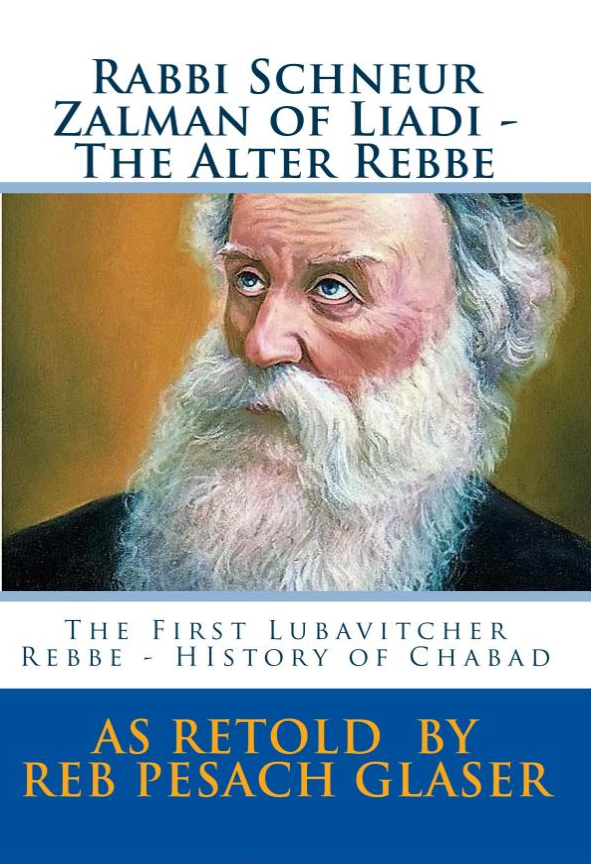 This book tells the story of the life of the Alter Rebbe, as originally described in the Chabad Heritage Series tapes by Rabbi Shloma Majeski.

It is the only comprehensive and authoritative history of the Alter Rebbe in English.

This book, which has transformed the Chabad Heritage series tapes into written form, will provide the adult reader with the history of the Alter Rebbe and Chabad in a way which is entertaining, informative, and easily referenced.

Explanatory footnotes, references, a glossary, chronology, maps and more are added to enrich the reader’s experience of the first Lubavitcher Rebbe. From the Rebbe's birth, to his bar mitzvah and marriage, through his arrest, liberation, and finally his histalkus the reader will gain an invaluable view into the fascinating life of the founder of Chabad Chassidus. This book will serve as an invaluable reference as well as an entertaining biography for anyone who has a connection to Lubavitch Chabad, whether expert or novice. 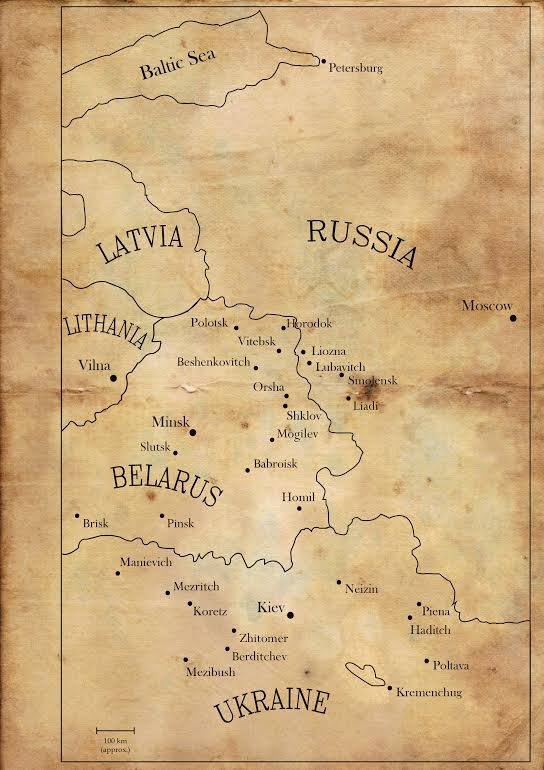 The Rebbeim of Chabad 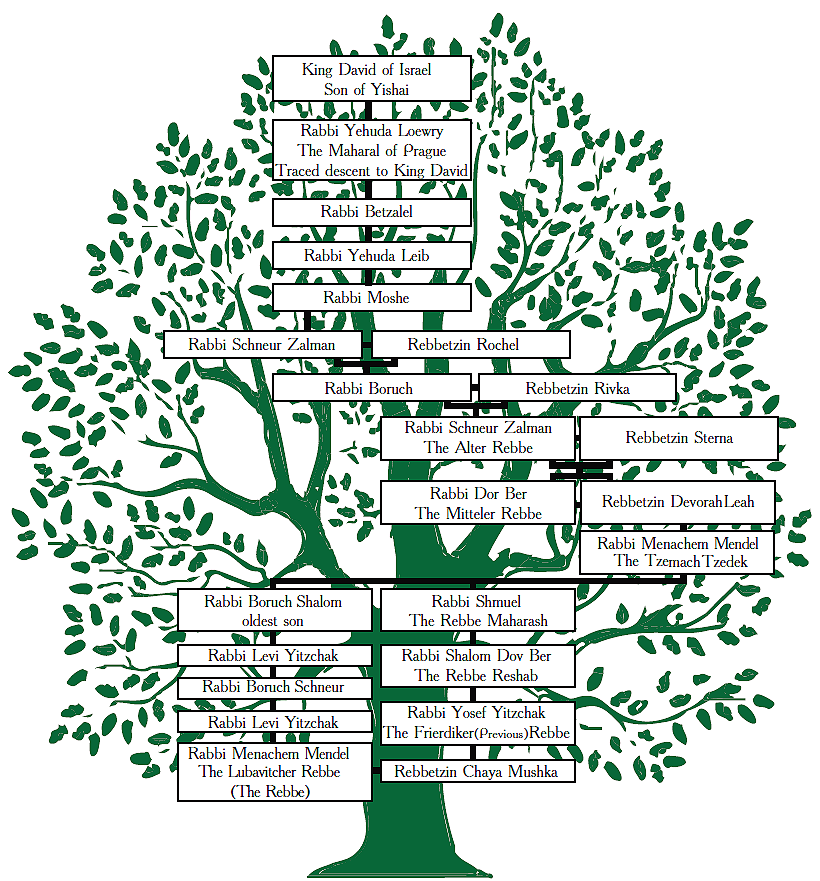 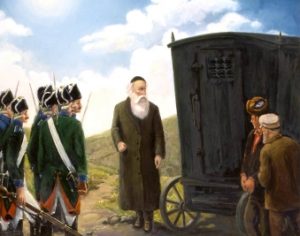 The Alter Rebbe also said that during the time he was sitting in jail he had visitors: his rebbe, the Mezritcher Maggid, and the Baal Shem Tov. When they came the Alter Rebbe said to them, “Why do I deserve this? What is it they are demanding of me in heaven? What is my sin? What did I do wrong?” They answered him: “There was a kitrug against you because of the fact that you spread Chassidus and you spoke about the concept of Chassidus in such an open way.” So, the Alter Rebbe asked them, “If that’s the case, when I leave from here should I stop?” They said to him, “No. Now that you started not only shouldn’t you stop but on the contrary, when you go out you should actually spread Chassidus even more than before.” In fact, that’s what happened. After the Alter Rebbe went out of jail he spread Chassidus in a way that was greater than before his imprisonment.

Chai Elul, the 18th of Elul 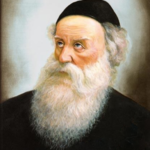 The Alter Rebbe was born on Chai Elul, the 18th of Elul, תק"ה (1745), in a small village near the city of Liozna. Named after his paternal grandfather, Reb Schneur Zalman, the first Rebbe of Chabad is known in the world by various names. He is known as the Baal HaTanya v’HaShulchan Aruch, because he wrote the sefer (holy book) Tanya and a Shulchan Aruch. He is also known as the Maggid of Liozna, the city he originally lived in, and as the Rav of Liadi, the city where he lived at a later point. However within Lubavitch Chabad itself, he is known as the Alter Rebbe.

On Chai Elul, it was the custom of the Baal Shem Tov to make a seudah (a special meal) to celebrate his birthday. The day of Chai Elul, the 18th day of Elul, in the year 1745, on a Wednesday, was the day the Alter Rebbe was born. They named the Alter Rebbe Schneur Zalman after Reb Boruch’s father, who had passed away when Reb Boruch was only 14 years old. At the same time that the Alter Rebbe was born in the small city near Liozna, in the city of Mezibush where the Baal Shem Tov was, there was a lot going on. Naturally, there were no telephones and no ways of communication as we have today. However, the Baal Shem Tov, with his ruach hakodesh, knew that the Alter Rebbe had been born and on that day he celebrated in the city of Mezibush even though no one knew why there was a celebration.

The Baal Shem Tov went to the mikveh (ritual bath) and when he came back from the mikveh his talmidim saw that he was in exceptionally uplifted spirits, and he was very b’simcha. Nobody was able to ask him what this was all about. Then the Baal Shem Tov said that he would daven (pray) himself, leading the davening, which was totally unusual. When he led the davening it was full of happy niggunim (Chassidic melodies). He didn't say tachanun (supplication prayers) that day, meaning it was some sort of a Yom Tov (holiday). So the Chassidim knew that it was a Yom Tov and there was tremendous simcha that day but they didn't know what it was all about.

After the davening the Baal Shem Tov asked all the students to sit down to a meal. Again, the Baal Shem Tov was in a tremendous simcha. The meal was customary because it was the Baal Shem Tov's birthday and he always had a meal on his birthday but at the meal he revealed what was going on. The Baal Shem Tov quoted a Gemora which says: “On Wednesday, the fourth day of creation, the luminaries were suspended in shamayim (Heaven).” The sun and the moon are the two things that give light to the world. The Baal Shem Tov said that on Wednesday of this week, the week of Kumi Ori (“Stand up my light”), a neshama chadasha came down to this world. This neshama is going to bring light to the world in the revealed part of Torah and in the inner, hidden part of Torah i.e. Chassidus. This neshama chadasha will have mesirus nefesh (self-sacrifice) for the path of Chassidus, but will succeed until Moshiach (Messiah) will come.

This all took place on Chai Elul. 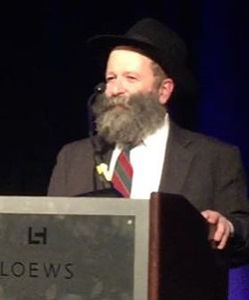 Born and raised in Cincinnati, Ohio,  Reb Pesach did not grow up as a Lubavitcher Chassid.  In fact, it wasn’t until he had completed his B.A. at the University of Chicago and his M.B.A. at Northwestern Kellogg Graduate School of Management that he met Rabbi Meir Chai Benhiyoun at the Chabad House of the Loop in downtown Chicago, began putting on tefillin, and started learning Chassidus.

He became a Baal Teshuvah, attended Yeshiva in Morristown, New Jersey, got married and has seven children, kinehara.  Throughout the process of returning to his faith he was fascinated by the stories of the Rebbeim of Chabad.  He also saw that when he told these stories to his children their eyes lit up with interest.

As Reb Pesach put it: “A number of years ago, I called Rabbi Majeski to ask him on which one of his tapes I could find a certain story.  He knew the answer off the top of his head but he remarked that he wished that someday one of his students would create a written version of his tapes so that such answers would be easier to find and be publicly available.”

“Although I was never officially his student I always considered Rabbi Majeski to be my teacher as I listened to his tapes over and over, told them at farbrengens and eventually wrote this book.”

“May it be G-d’s will that by publishing this book I will be making a small contribution to spreading the teachings and light of Chassidus.  As we know, a little bit of light can dispel much darkness like lighting one candle in a dark room can brighten the entire room.  May it happen immediately that the darkness of golus will be dispelled by the greatest light of all with the coming of Moshiach.”

Reb Pesach is a C.P.A. and has worked as Senior Staff Accountant in the Enforcement Division of the United States Securities and Exchange Commission for over 30 years.

He and his wife, Sarah, were recently honored as Parents of the Year at the Seymour J. Abrams Cheder Lubavitch Hebrew Day School.